The Humbling Experience of Being a Reality Show Reject

The Humbling Experience of Being a Reality Show Reject 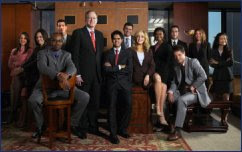 “The verdict is in and Kelly, you’re out.”

To recapitulate: I was the first lawyer fired on the new reality series, “The Law Firm”, by famous creator, David E. Kelley, which aired this past Thursday, July 28, on NBC.  Roy Black fired me for “taking a backseat during the trial”.  The rest of the evidence concluded that I was fired for incompetence.

Though it’s a TV show, and I generally subscribe to the theory behind the phrase, “Me thinks thou doth protest too much”, that blatant mischaracterization on public television forced me to rear this statement in defense:  I am not incompetent.  What you saw was clever, and rather cruel, editing.  It certainly ruined my ego; I can only hope it will not affect my career.

For those of you who missed it, I played the “role” of the hopelessly inexperienced and incapable lawyer who functioned mostly as a “prop”, rather than a lawyer, on the first episode of the Law Firm.  I still cringe at the writers’ portrayal of me in that episode, with the seemingly endless scenes attributing me with a blank face, inane comments, and other “prop-like” traits, culminating in a barely-comprehensible opening statement to the Judge.  Highlights of “Lawyer Kelly” on that first show included: 1) a head-scratching comment on the selection of men; 2) a not-so-brilliant comment on the positive connotation of the term “vigilante”, and 3) a painfully cruelly, edited opening statement.

Other than to emphatically remind you of the amazingly humbling power of editing (read: I AM a good lawyer), I am not here to tell you how it really went.  One, I signed a non-disclosure agreement.  Two, the show was filmed a year ago, and being sleep-deprived the entire time, I simply don’t remember.

However, in an attempt to somewhat revive my reputation, I will share how this experience affected me.  First, I was outraged at my portrayal.  I had clearly and grossly underestimated the frighteningly great power of editing. (Read: I AM a good lawyer)  Secondly, I was humbled - as an attorney, and as a human being.

Prior to the show, I was a respected attorney.  I graduated early, with honors, from college and law school, and passed the bar (first try), at age 24.   In fact, I had served as a faithful member of the bar for over five years before the show, and although I was considerably younger than most of my colleagues, I consistently won every trial and arbitration I had ever participated in.  I was confident.  Some may even have labeled me cocky.

After the show, I had probable cause to believe my trial career was effectively over.  The show utterly diminished my confidence as a lawyer.  In a mere 15 minutes, I felt that I had completely obliterated any credibility that I had worked so hard to establish over the past five years.  After that first episode where I was characterized as an incompetent lawyer, labeled an unworthy competitor, and dismissed as a floundering idiot, I seriously entertained the thought of quitting the practice of law.

I could not face the legal community the next day.  I honestly couldn’t tell you which was more unbearable: 1) enduring patronizing pity from colleagues, or 2) suffering pathetic, socially-deviant behavior such as the obsessive Googling of myself - frantically combing the Internet for nasty articles and message boards.

IT HURT.  Though I have yet to determine if the bad press affected me professionally, it had definitely injured me psychologically.  Many thought I deserved it for volunteering to be on a reality TV show.  And I agree.  How I relished in the ego-boosting publicity the days before the premiere episode!  I boasted relentlessly of being selected to be on this prestigious competition.  Ask my friends and family, and they’ll tell you how I exercised absolutely zero restraint in promoting myself for one whole year.

I am now a humbled woman.  Here is some advice to those of you who suffer the deadly sin of pride: Get on a reality TV show.  Sign away all your rights.  Subject yourself to cameras and the unfettered creativity of writers and editors.  You will be cured.

It is not easy to be humiliated, and it’s a true shame that I couldn’t have had a better 15 minutes on television.  But though my confidence is shaken, I do realize and accept that television shows (“reality” or not) serve as pure entertainment.  Thus, I am not ready to quit the practice of law.  Not from one TV show.

This experience has humbled me greatly, but I have no regrets.  Would I do it again?  Absolutely.  Differently, perhaps, knowing what I know now.  Nevertheless, the answer is yes.  So, I will continue to watch the rest of the cast of “The Law Firm” fight it out every Thursday night.  And I conclude by emphatically reminding you of the awesome, humbling power of editing.  (Read: WE ARE ALL GOOD LAWYERS).
Posted by Kelly Chang Rickert at 12:06 PM No comments: